It is a truth universally acknowledged that a man (or woman) in possession of a German passport must be in want of a good quality sausage.

No, you filthy minded lot, not that kind of sausage.  I know the Germans have a reputation for naked saunas and man bags, but they’re not all after a bit of that, thank you very much.  I’m talking about the kind of sausage that you can chuck on the barbie and eat with mustard.  The German nation must be the most sausage-loving in the world, and as I come from the home of the beloved Cumberland, I’m authorised to hand this accolade to them.

There are so many varieties of sausage in this country that Wikipedia has FORTY-THREE separate pages dedicated to the main varieties of German Wurst, and some sources suggest there are 1,200 different types of sausage in Germany.  Surely there are only so many ways you can process the bits of a pig that nobody wants to actually eat and find a way to flog it to the masses?  Those genius Germans have certainly been creative, and this goes way, way beyond those rubbery frankfurters we all know and love.  (As a side note, long before frankfurters became the domain of hot dog stands and baseball games, they were actually a delicacy served to honour the coronations of Holy Roman Emperors in Frankfurt.  Every sausage has it’s tale.) . Let’s take a look at a cross-section of German sausage culture.

We will start our in-wurst-igation (see what I did there) with the most famous sausage in the world.  Hailed everywhere from Munich to the drunken streets around Newcastle’s Christmas market and even in the US as the mother of all sausages: the Bratwurst.  A relatively run-of-the-mill sausage consisting of ground pork, the first evidence of the Bratwurst recipe can be found in 1313 from Nuremberg.  And if you thought a Bratwurst is just a Bratwurst, think again my friend.  Hello, we’re talking about the country that has 5,000 beer brands here; of course they’re not going to settle for one Bratwurst recipe.  No, the Germans have come up with over 40.  Four Zero.  The mind boggles!  Bratwurst recipes vary by region, but almost always come served with a huge dollop of Sauerkraut (good luck digesting that) and something carby and colourless (this is German cuisine, after all).   If you’re a real fan of this one, you may want to visit the undoubtedly thrilling Bratwurst museum in Holzhausen, where a giant Bratwurst statue even graces a roundabout in the otherwise picturesque town, not looking questionable at all.

Moving on to another famous staple of German sausage folklore: Currywurst.  The sausage itself is a plain old Bratwurst, but this one packs punch: sliced and drowning in a sea of curry-flavoured sauce, it doesn’t taste much like sausage at all and looks a bit like something your dog barfed up, but it is the ultimate comfort food.  This treat was created by Herta Heuwa, who managed to obtain ketchup and curry powder from some British soldiers in 1949 Berlin (those soldiers missed a trick there) and created this satisfying snack, which has since cemented itself as a celebrated part of German culture.  800 million currywursts are consumed every year in Germany, and I have to admit I ‘modestly’ contributed to that statistic…  Fun fact: every Berlin mayoral candidate has to be photographed at a currywurst stand.  Ich bin ein Currywurst.

Another famous Wurst you may have heard of is the Bavarian Weißwurst.  A white, flaccid looking veal sausage, in the days before fridges were invented the sausage was made fresh in the morning and eaten before noon because the lack of smoking and preservatives meant the meat would spoil quickly.  Therefore it forms part of the traditional Bavarian breakfast – white sausage, Brezel, sweet mustard, and beer.  Hey, it’s five o’clock somewhere!  The traditional way of eating it involves removing the skin at the end and sucking it all out.  And yes, I’m still talking about sausages.  What were you thinking about? 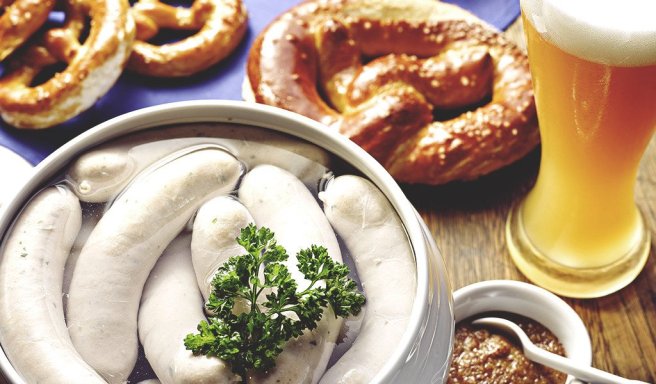 So now you’re feeling deliciously hungry, it’s time to put you off any thoughts of dinner you might be entertaining.  Now we, of the UK descent, know that sausages contain all the ‘shit bits’.  We just don’t think about it when we’re tucking in to our bangers and mash, because once it’s all processed, who knows if it’s a bit of brain that you’re eating?  Well, the Germans don’t shy away from this.  They will put everything in that sausage, and they’re not going to hide it.  I’m not talking here about Blutwurst or Rotwurst, the blood sausage.  The Germans aren’t unique there and we have black pudding.  No, I’m talking about Zungenwurst.  Zunge = tongue.  And whilst I’m not going to disagree that tongue is quite a tasty meat in the right circumstances (preferably shitfaced ones), I don’t need to eat it pickled and cooked whole in a giant meatloaf-like blood and oatmeal sausage.

I like many of the German sausages, but they’re often over processed for my delicate English taste buds.  Oh, what I wouldn’t give for a Cumberland sausage.  If you’re planning to visit… 😉

Right now, in the words of Billy Mack, Christmas is all around (if you need to ask Google about this Brit pop culture reference, we’re not friends) so it’s only right to have an ‘Expat in Germany’ Christmas special.  Before I start, there’s something you should understand about me.  I’m undisputedly one of the world’s biggest Christmas fans.  I’m not religious.  I just love tinsel, and Christmas jumpers, and snowman socks.  I love that even though it’s cold and dark outside, the streets are brightly lit with garish lights and we’re surrounded by shop displays full of pine cones and baubles.  I love that I can read soppy chick lit with titles like Christmas at Tiffany’s and watch trashy made-for-TV movies about princes falling in love with undercover journalists without any guilt.  I love wrapping presents whilst listening to Michael Bublé on repeat (sorry, hubby) and seeing them stacked under the twinkly Christmas tree.  I love the parties and drinks and ALL the food.  I’m totally with Andy Williams: it’s the most wonderful time of the year.  And where better to spend it than the land of the humble Christmas market?

Christmas markets are springing up all over Europe these days – even the UK is getting in on the act, with almost every town having a few German-style stalls manned by Poles (the Brits can’t tell the difference between foreigners; they’re suspicious of all of them.) But Germany is synonymous with the Weihnachtsmarkt.  Fun fact: Germany boasts over 2,000 Christmas markets, 80 of which are in Berlin alone, and one of those is especially for dogs (oh, those hipsters!).  They contribute billions to Germany’s economy and are a major tourist attraction across the country.  No wonder that in the month of December, Hamburg seems to double in capacity and becomes a truly international city for a short period.   Spaniards jostle to the front of the Bratwurst queue to the chagrin of the patient Brits, Germans sneak out of work during their lunch break for a cheeky Glühwein spiked with rum, while Russian girls in stilettos attempt to stay upright on the cobbles of the town square.  Every stall boasts a selection of either something that might make a good present for your nan (because she probably really needs alpaca wool socks), or something you want to eat even though it’s bad for you (crepes with melted Kinder chocolate and Baileys, anyone?) .  Hamburg seems to have Christmas markets on every corner, the most famous being the one outside the beautiful Rathaus.  This one is extra special: three times a day a sleigh complete with some spectacularly tacky reindeer (minus Rudolph, Prancer and Vixen, which sounds like the word for wank in German) flies over the market and a man dressed as Santa tells a long-winded story about said reindeer whilst everyone records him on their phones.  Apparently last week Santa fell out – perhaps three weeks of telling the same story every day has finally driven the poor sod over the edge.  Or maybe it was the lack of Vixen.

There are a lot of other festive traditions in Germany aside from getting smashed at the Christmas market every other day (or is that just me?) Like other countries, having an advent calendar is popular, although German adults tend to count every Sunday of Advent and light a candle on an Adventskranz (wreath).  Not embracing the fact I am supposedly a grown up these days, I went for the chocolate variety.  I didn’t know until I came to Germany that everyone here thinks Brits are obsessed with After Eight, thanks to some low budget 90s advertising campaigns.  Imagine my excitement when I found a 3D Big Ben After Eight calendar, complete with something British depicted behind every door.  I’ve had everything from a black cab to the London Eye to Sherlock Holmes to a cup of tea.  It’s a goldmine of stereotypes and has put a smile on my face every morning (the huge minty chocolates aren’t bad either!)  Also worthy of an honourable mention is Nikolaustag, which happens on the 6th December.  Children have to leave a shoe outside the door the night before and if they’re lucky, St Nick fills it with sweets.  If they’re unlucky, I suppose their neighbours will nick their shoe.  By the way, do you know where the name ‘Santa Claus’ comes from?  Try saying St Nikolaus over and over again, out loud and fairly fast.  You’ll sound like a weirdo, but bear with me.  Got it?  Yep, the Americans warped yet another European tradition!

There is one German Christmas tradition that I do find hard to accept.  The 25th, Christmas Day, THE DAY, is just not a thing here.  What is that all about? So much build up for a family dinner on Christmas Eve?  No turkey.  No crackers.  No paper hats or badly printed jokes.  No speech from the Queen, long-anticipated-but-we-all-knew-it-would-happen death in Eastenders, no food coma, no drinking too much sherry in the afternoon.  For all the magical Christmas build up that Germany does – the tasteful lights, the lighting of the Advents candle every Sunday, the Christmas trees everywhere you look – I can’t help missing that little bit of Britmas tradition that I grew up with.  So my mission is to bring Christmas Day to Germany!

On that note, I’m signing off for the year to fly back to the country of Christmas Day and sit top to tow in tailbacks for five hours.  Rest assured I will be stocked up with mince pies and chocolate yule logs in the car.  I wish you a very happy holiday season if Christmas isn’t your thing, and a very Merry Christmas if it is.   I look forward to sharing more of my Expat in Hamburg observations with you in 2018!

German Word of the Week

Literally: ‘it’s all sausage to me’